More than a third of Irish adults living without a pension 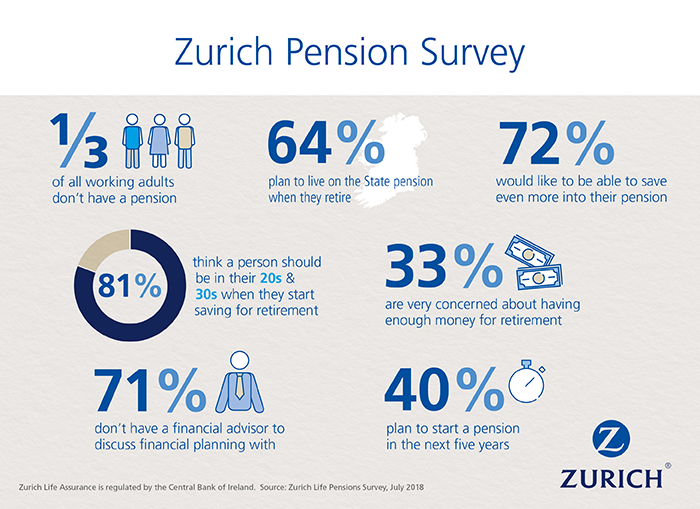 Over one third of Irish workers do not have a pension

September, 2018 – More than one third (36 percent) of Irish workers don’t currently have a pension, according to new research published by Zurich Life Assurance plc.

The new Zurich Pensions & Retirement Survey found that significantly more women (41 percent) are living without a pension when compared with men (32 percent).

For those that don’t contribute to a pension “a lack of spare money” (61 percent) and “not getting around to it” (26 percent) were identified as the main reasons. Of these, 40 percent think it is “too late” to start saving for retirement at this stage in their lives.

Furthermore, almost a third (30 percent) of people without pensions have no intention of ever setting up a pension, with 64 percent of these relying on the state pension once they retire.

For those that plan to set up a pension in the future, just 12 percent expect to do so in the next year, with most (40 percent) looking at one to five years.

Despite this, most people feel the sooner one starts saving for retirement the better and half of all respondents (49 percent) identified “Your 20s” as the best period to start a retirement pension, followed by “Your 30s” (32 percent). Interestingly, only 36 percent of 18 – 34 year olds, as opposed to 56 percent of those aged +35, believe you should start a pension in “Your 20s”.

So, the research points to a disconnect between people believing that retirement planning is best started early and the survey results; which indicate that a lack of access to spare money and other more pressing priorities, result in people not taking early action to start a pension plan.

The research found that the average monthly pension contribution is €215 per month. Just over half (51 percent) of pension holders are happy with the size of their personal contribution, however 72 percent of people would like to save more into their fund, ideally €271 on average.

Almost one in five (18 percent) of mortgage holders don’t expect to have paid off their mortgage by the time they retire. Similarly, nearly 4 in 10 people who currently rent (38%) feel they’ll most likely continue living in rented accommodation after retirement.

Commenting on the findings, Jonathan Daly, Head of Retail Distribution and Propositions at Zurich said: “This new research, which found that 31 percent of Irish people are very concerned about having enough money in retirement, proves that there is a significant cohort of Irish people who feel they should be contributing more for their later years.”

“Starting a pension is one of the smartest decisions you can make and the best way to ensure the lifestyle you want in retirement is to take ownership of it now, so that hopefully by the time you retire you'll have built up a substantial pension pot. Often people feel they don’t have capacity to start a meaningful pension, however we’d encourage everybody to seek expert advice because small savings over a long period can lead to a significant sum in later life.”

Over half of workers (55 percent) believe that they should be personally responsible for looking after their retirement fund, compared to 27 percent of people who believe the responsibility should sit with the Government and a further 18 percent who believe that employers should be accountable.

Jonathan Daly added, “We welcome the publication of the recent strawman consultation paper which aims to address the issue of low levels of private retirement provision in Ireland. However, auto enrolment will not come into effect until 2022 at the earliest, so people should start planning for their retirement today by talking to a financial broker”

Notes to the Editor:

The research referenced in this press release was conducted by iReach Insights on behalf of Zurich. The survey was conducted nationwide in June and included a sample of over 1,000 respondents.

About Zurich in Ireland

Zurich is one of Ireland’s leading insurance providers, offering a wide range of general insurance and life insurance products and services. Zurich Ireland entities employ over 1,000 people across locations in Dublin and Wexford.

Zurich Insurance Group (Zurich) is a leading multi-line insurer that serves its customers in global and local markets. With about 53,000 employees, it provides a wide range of property and casualty, and life insurance products and services in more than 210 countries and territories. Zurich’s customers include individuals, small businesses, and mid-sized and large companies, as well as multinational corporations. The Group is headquartered in Zurich, Switzerland, where it was founded in 1872.