Taking control of your feelings 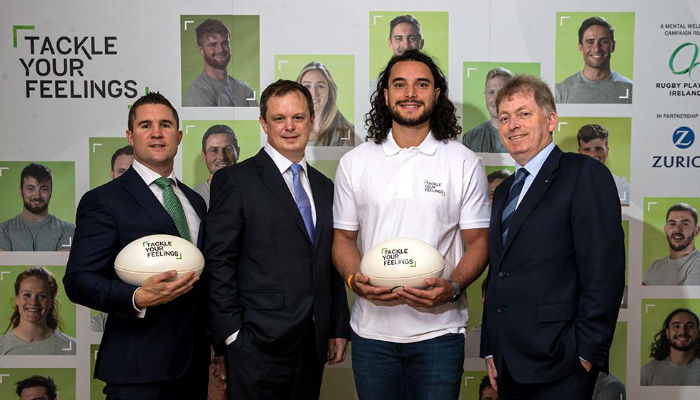 Rugby Players Ireland and Zurich have relaunched the Tackle Your Feelings mental wellbeing app and website as part of the new ‘Take Control’ campaign. The campaign aims to promote a proactive attitude towards mental health and to provide people with the tools to ‘Take Control’ of their mental wellbeing using sport psychology and positive psychology principles. The new app and website will equip users with the tools to develop coping skills and provide access to a support network, including professional help when needed.

Commenting on the launch of the Tackle Your Feelings ‘Take Control’ campaign, Leinster Rugby Player and ambassador James Lowe said: “I’m delighted to be an ambassador for the Tackle Your Feelings and to tell my own story of how my arthritis diagnosis at age 14 impacted me physically and mentally. As a sporty kid, this was tough, but the power of positive thinking got me through, and today I really realise how lucky I am to play rugby.”

The campaign will feature several leading Irish international and provincial rugby players, along with James Lowe, as role models and to help remove some of the stigma associated with mental health.

Anthony Brennan, CEO, Zurich Ireland said: “We at Zurich are delighted to support the Tackle Your Feelings ‘Take Control’ campaign with Rugby Players Ireland. Our research clearly demonstrates that while people appreciate the importance of managing their mental wellbeing, they are not taking control of it as they do for their diet and fitness. This may be because half of Irish people stated they are unsure as to how they should manage their mental wellbeing. We believe the app and website will encourage and make it easy for people to be more proactive and incorporate mental wellbeing as part of their daily routine.”

Tackle Your Feelings, Campaign Manager, RPI, Hannah McCormack, said: “We’re privileged to be partnering with Zurich for phase two of the Tackle Your Feelings campaign. Our new tools aim to empower people to take proactive steps towards managing their mental wellbeing, and learn when they may need to seek external support. There is also a chance to become part of the TYF community, with the hope that members will eventually contribute to the website. They can also keep up to date on the latest Tackle Your Feelings news at the new Tackle Your Feelings Instagram page.”

A number of features have been enhanced and further developed from the previous Tackle Your Feelings App including: a general and personal locker, a goals locker, the ability to write and record notes and the wellbeing indicator test. An expanded “test centre” will allow users to measure different aspects of their mental wellbeing which can be tracked in their personal locker. The new more interactive website will be constantly updated with new information and there will be a section registered members can post to and become part of the Tackle Your Feelings community.

Once users have registered they will be able to switch between the website and the app without losing any saved resources and will be able to access personal and general lockers.

About: About: Tackle Your Feelings