Global equities suffered one of their worst months in years in September, as aggressive monetary tightening weighed on investors’ minds, writes Ian Slattery. 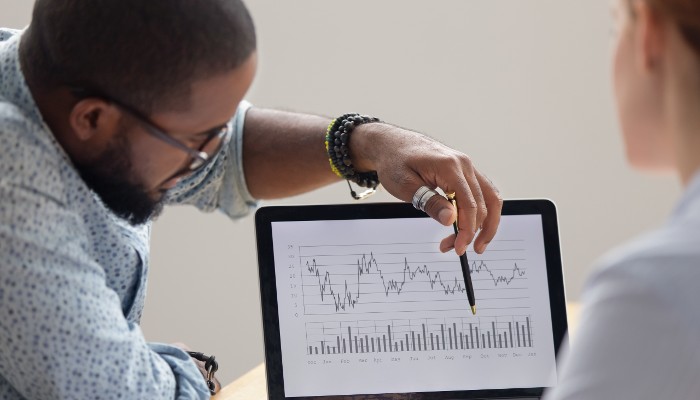 Economic growth is expected to slow from this point and leading indicators such as PMI data supports this perspective. Within equity markets, the focus now begins to shift toward the Q3 earnings season. Investor sentiment remains at a low level, with the American Association of Individual Investors survey showing bears outnumbering bulls by the largest margin since 2009.

Global sentiment was dealt another blow following the ‘mini-budget’ announcement from the new UK government which triggered volatility across UK bond and equities markets whilst sending Sterling into a brief tailspin against the US dollar. Intervention from the Bank of England briefly calmed markets, although the full fallout from the budgetary announcements remains to be seen.

World equities in euro terms, returned -6.9% in September, down -13.4% so far in 2022. Europe was the best performing market in Euro terms in September, albeit with a return of -6%. The worst performer of the main geographical areas was Hong Kong, slipping -11% in Euro terms as China’s Zero-Covid policy continues to affect growth prospects throughout Asia.

Within US equities only the healthcare sector produced positive returns of 0.03% as cash flowed into safer sectors on the back of the recent decline in market sentiment. This year so far, the energy sector remains to be the clear outperformer returning 56.41% in euro terms within the US. The past month has seen more volatile energy prices with European governments in a critical position, and the energy sector is down -6.8% globally this month in Euro terms

A number of prominent global central banks raised interest rates in September, as they continue to grapple with high inflation and the ensuing fears surrounding economic growth prospects. This prompted a sell-off in government bonds with the over five year Euro government bond returning -5.4%. So far in 2022 the five year Euro bond index is down -22.61%.

Longer-dated UK gilts underperformed in September with yields on the 10 Year Gilt rising above 4.4% on the back of the UK Governments mini budget announcement. The BoE intervened by deciding to buy an unlimited number of long-term gilts to restore orderly market conditions.

The 10 Year US Treasury note rose above 4% for the first time in over a decade in September, as investors interest rate expectations continued to move higher. In Europe, energy costs pose a difficult challenge heading into this winter which further complicates the policy backdrop from the ECB’s perspective.

The US Dollar continued to rise versus its main trading peers in September as risk-off sentiment persisted as higher interest rates materialised. This, combined with the Pound Sterling’s drop-off following the UK mini-budget announcement, meant the Dollar strengthened considerably in September.

The US Dollar Index has gained 17.2% this year, its highest annual gain in over 50 years while the Euro finished the month with 1 euro buying 0.98 Dollars, down 2.5% from last month.

Commodities declined in September with the broad Commodity index down -5.1% in Euro terms. Weaker energy prices, along with lower demand for industrial and precious metals, meant that Copper, a barometer of world economic growth was down -4% in Euro terms as demand slowed.