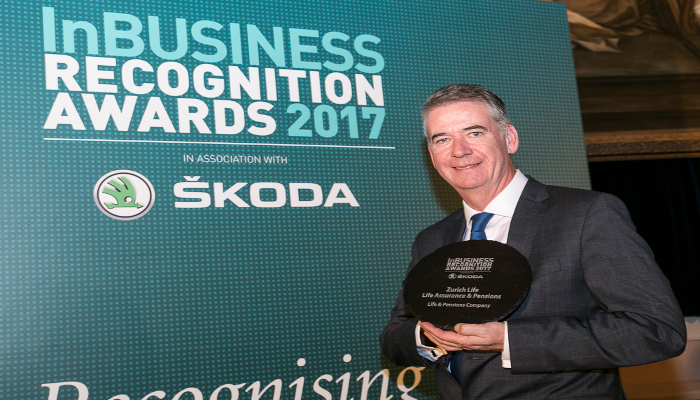 Zurich picked up the Best Life Assurance and Pensions Award at the 2017 InBusiness Recognition Awards on 6th December in Dublin's Westin Hotel. Joe Creegan, Head of Corporate Life & Pensions, picked up the award on behalf of Zurich.

This is the fourth year in a row that Zurich has won in the Life Assurance & Pensions category, and reaffirms Zurich's position as a trusted brand in the Irish market.

Chambers Ireland plays an important role representing and supporting Small and Medium sized Enterprises (SME's) across Ireland and SME's are an important customer group for Zurich in Ireland.

Winners of the awards were chosen across a number of business categories. The Company of the Year Award was presented to Dublin Port. PayPal's Louise Phelan PayPal was named Businesswoman of the Year and Dave Kirwan of Bord Gáis Energy was named the Businessman of the Year.