Zurich once again was the headline sponsor for the Zurich Irish Rugby Awards 2018 when a fantastic night at the Clayton Hotel, Burlington Road, Dublin drew all the big names in Irish Rugby in an amazing Grand Slam year. 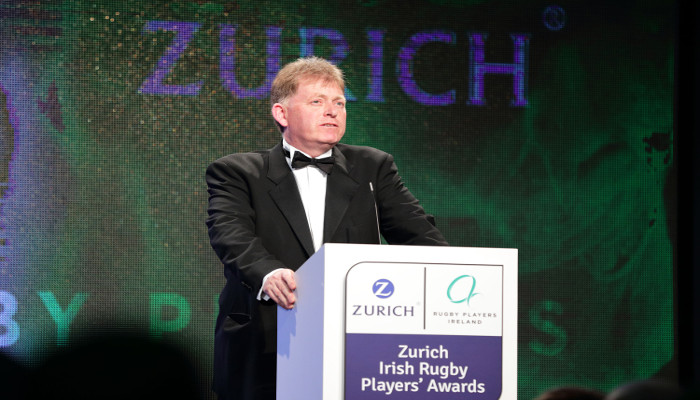 Munster and Ireland’s Keith Earls was awarded the title of Zurich Players’ Player of the Year 2018 by his fellow players at the Zurich Irish Rugby Awards ceremony. Earls, who made his debut for Ireland in 2008, enjoyed a stellar season for both club and country and has been widely praised by his peers for his dedication and hard work throughout his career. He was outstanding as Ireland won their third Grand Slam in March, and he was also instrumental for Munster as they progressed to the latter stages of both the Champions Cup and PRO14. Earls (30), wins the award ahead of last year’s winner Conor Murray, and Leinster’s Johnny Sexton and Tadhg Furlong.

Meanwhile, Jacob Stockdale was named as the Nevin Spence Young Player of the Year 2018. The Ulster winger, who is now the record try-scorer in a Six Nations campaign, first came to prominence in an Ireland jersey following several try-scoring performances in the November internationals. In claiming the award, Stockdale came in ahead of strong competition in the form of Leinster duo James Ryan and Jordan Larmour.

On receiving his award Earls commented: “It has been a great season with many special memories for me. For all the successes there were some challenges too with injuries and it is even more thrilling to have had the season I have and the recognition of my teammates, with some of those setbacks. I’ve given it my all, but it wouldn’t have been possible without the support of my teammates, friends and of course my family.”

The BNY Mellon Women’s XVs Player of the Year 2018 as voted by members of the Ireland squad was presented to Claire Molloy for several outstanding performances throughout the season. Meanwhile, Irish 7s captain Lucy Mulhall claimed the Rugby Players Ireland IRFU Women’s 7s Player of the Year, in a week where Ireland claimed a best ever finish at the Canada 7s in Langford. Many of Ireland’s Grand Slam heroes were present at the Clayton Hotel on the Burlington Road last night for what was a celebration of momentous season for Irish rugby on the field. Irish rugby legends showed their support attending in great numbers, while several of Leinster’s newly crowned European Champions were also amongst the guests.

Anthony Brennan, CEO of Zurich in Ireland said “I wish to extend my congratulations to all of our worthy winners tonight – and to all of those who were nominated. Zurich is delighted to sponsor these Awards, recognizing the achievements of Irish rugby players in what has been a remarkable season for the sport at a national and provincial level.  We look forward to continuing our support of Rugby Players Ireland and the Tackle Your Feelings campaign, which encourages people to look after their mental wellbeing, with the support of some of Irish rugby’s most influenctial names to inspire and help others.”

Joining Ireland’s heroes in the BNY Mellon Hall of Fame was former Ireland captain Brian O’Driscoll. Duncan Casey, who departed Munster for Grenoble in recent months, was awarded the Vodafone Medal for Excellence, which rewards on-field effort combined with off-field commitment to the game.The Zurich Contribution to Irish Society, was presented to Jack McGrath in recognition of his work in his community.

While there were several moments throughout the season that will always be remembered fondly, members of the public determined that Ireland’s victory over England was the Druids Glen Hotel & Golf Resort Rugby Moment of the Year via Twitter. Simon Keogh, CEO of Rugby Players Ireland commented: “Winning a Zurich Irish Rugby Award is one of the highest honours a player can receive in the game here in Ireland. There have been many great achievements by Irish players this year, but to be acknowledged by your teammates and opponents in this manner shows just how much of an impact a player has made throughout the season. I am thrilled for Keith who has had a fantastic season, and many before that.”

ZURICH PLAYERS' PLAYER OF THE YEAR 2018

WOMEN'S 7S PLAYER OF THE YEAR