Apple grabs the headlines, as earnings leads markets higher, and companies such as Walt Disney and Glencore will be in focus this week as earnings season continues, Ian Slattery reports.

Equities moved higher last week, as earnings continued to be a positive influence on markets. Apple took most of the headlines as a positive earnings report pushed it to become the first trillion dollar company in history. From a wider perspective 4/5ths of the S&P has now reported with over 80% beating earnings-per-share expectations.

The monthly non-farm payrolls from the US disappointed slightly, coming in at 157,000 versus a consensus expectation of 193,000. However, the blow was softened by upward revisions for the two previous months, combined with a tick down in the unemployment rate to 3.9%.

The Bank of England raised rates to 0.75%, in a move that was well flagged to markets. The Bank of Japan and the US Federal Reserve both kept their rates steady in meetings last week. The market expects two further rate rises from the US this year, with the next one forecast for the September meeting. 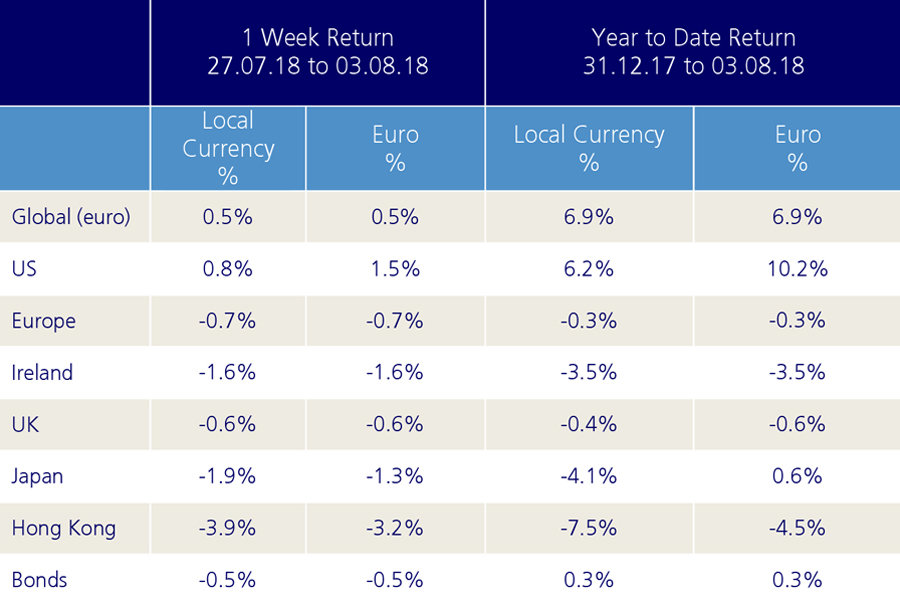 The global index moved higher last week, finishing up 0.5%, with a positive move from the US offsetting weaker performances elsewhere.

Oil was lower and closed at $68.50/barrel, whilst gold continued its recent weakness to close at $1,213 per troy ounce.

The ten year US bond yield finished at 2.95%, after briefly hitting above 3% during the week. The German equivalent closed at 0.41%.

Tuesday 7 August: Earnings season continues, with the focus this week on companies such as Walt Disney and Glencore.