Markets grind higher amid Turkish turmoil as the Lira lost over 20% of its value versus the US Dollar. Ian Slattery reports.

Political and economic developments from Turkey came thick and fast last week, as the Lira lost over 20% of its value versus the US Dollar, as President Erdogan attempted to avert a full blown financial crisis. President Trump turned the screw further by announcing further trade sanctions on the embattled economy. Contagion spread to some European financials on fears regarding exposure to Turkish creditors.

Elon Musk grabbed further headlines with an audacious tweet claiming he has ‘secured funding’ to take Tesla private, and off the stock market. It remains to be seen how this will end, with Tesla Bulls and Bears evident throughout the market. 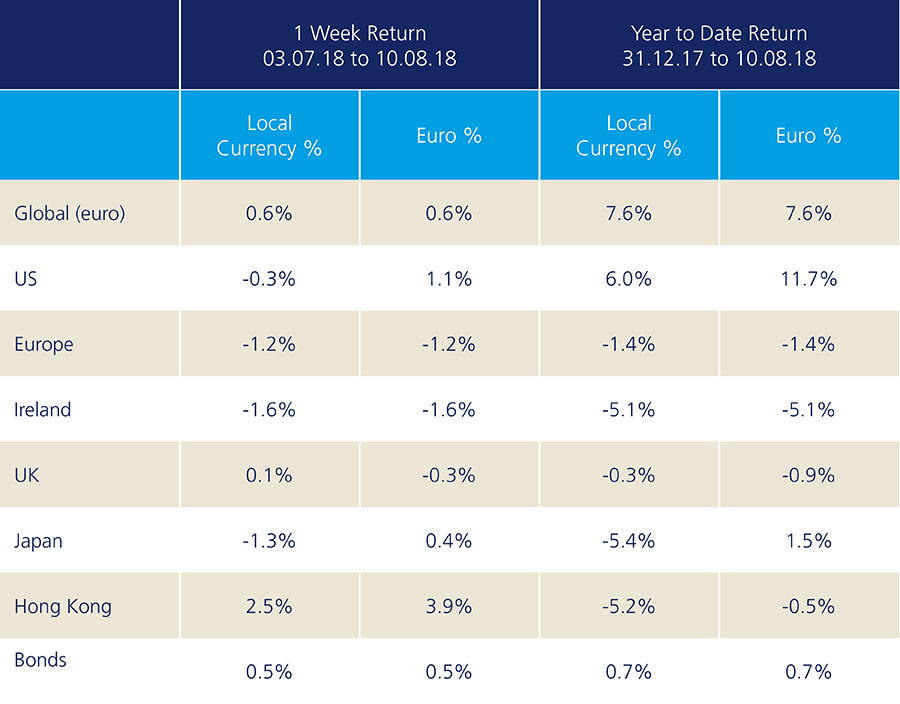 The global index moved higher last week, finishing up 0.6%, with a positive move from the US offsetting weaker performances elsewhere. Oil was lower and closed at $67.50/barrel, whilst gold continued its recent weakness to close at $1,212 per troy ounce. The 10 year US bond yield finished at 2.87%. The German equivalent closed at 0.32%, amid ‘risk off’ sentiment.

Tuesday 14 August: The second estimate for Q2 GDP in the eurozone goes to print, where the consensus forecasts a figure of 0.3% (QoQ).

Wednesday 15 August: The FOMC convenes for its latest interest rate meeting where the market does not expect any change to current policy, with two further rate rises forecast by the market this year.

Friday  17 August: Eurozone inflation data also goes to market this week, with the core reading estimated to be 2.1% (YoY).