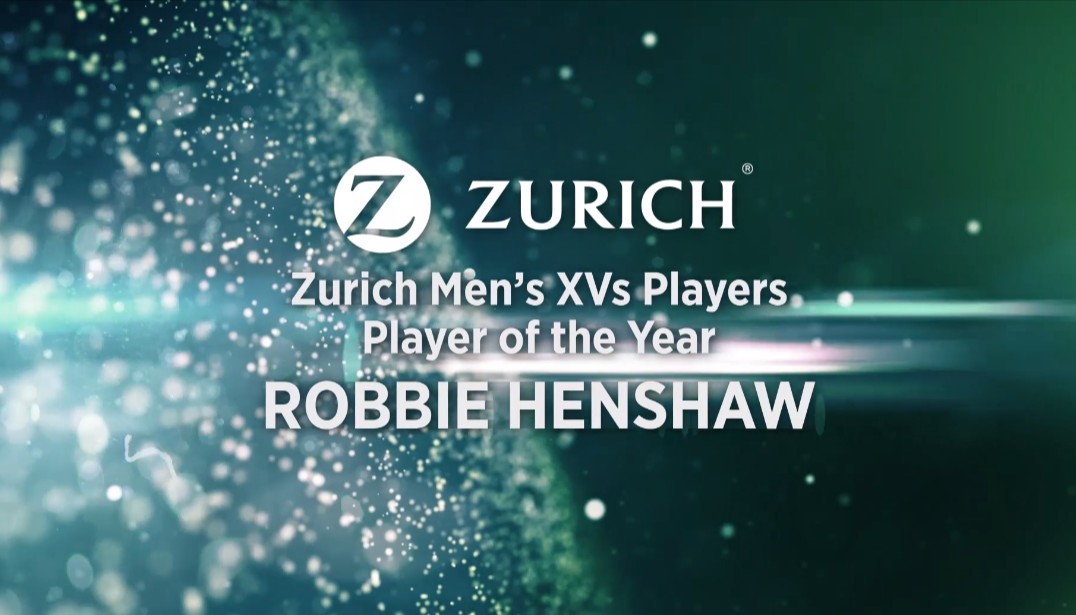 Leinster and Ireland’s Robbie Henshaw was named as the Zurich Men’s Players’ Player of the Year 2021 by his fellow players at the Zurich Irish Rugby Players Awards ceremony. Hosted on YouTube by Barry Murphy and Andrew Trimble, the virtual event was due to take place at the end of last season but was postponed owing to Covid-19 concerns.

It is the first time that Henshaw, who has won the Nevin Spence Young Player of the Year award on three occasions, has prevailed in the senior category. Henshaw’s form last season saw him nominated for the Six Nations Player of the Tournament, while he was also a central feature of the Lions tour to South Africa in the summer. He wins the award ahead of Connacht’s Tom Daly and his fellow Lions tourists Tadhg Beirne and Iain Henderson.

On receiving his award, Henshaw commented: “The 2019/20 campaign will always stand out in my mind because the circumstances under which we played were so unique. I’m hugely honoured to win this award but I think the wider rugby community also deserve great credit for how they kept the show on the road to give players like Tadhg, Tom, Iain and I the opportunity to go out to play for club and country.”

Following an abrasive Six Nations Championship, Dorothy Wall took home the Zurich Women’s Players’ Player of the Year and was also named the Whoop Women’s Young Player of the Year which was being awarded for the first time. She wins both awards ahead of her international colleague Béibhinn Parsons who was the winner of the MSL Motor Group Women’s Try of the Year Award for her effort against Wales.

Speaking on her double victory, Wall said: “We’ve had a tough year on and off the field but I’ve taken great delight in how the team has performed in recent weeks and take great hope in what we stand to achieve as a group in time to come. We have great quality in the squad, not least in my fellow nominees Eimear (Considine), Stacey (Flood) and Béibhinn. While we failed to continue in the form that we finished out the Six Nations with, the experience of the past few months will only stand to us in the longer term.”

Having been capped by Ireland in the summer to round out a prolific season, Gavin Coombes will also go down as the Nevin Spence Young Player of the Year for 2021.

Meanwhile, Coombes’ former Munster teammate CJ Stander accepted the Druids Glen Moment of the Year Award on behalf of his former Irish teammates for their victory over England in the final round of the Six Nations. The occasion also marked Stander’s last outing in green.

Despite a quiet year on the Sevens front, Lucy Mulhall has been voted as the izest Marketing Irish Women’s 7s Player of the Year 2020 with Olympian Terry Kennedy claiming the AIB Corporate Banking Irish Men’s 7s Player of the Year for a third time. Both players dialled in from Dubai to receive their awards. Another to call in on the event from abroad was JJ Hanrahan who finished off a stylish Munster Rugby move against Cardiff Blues to claim the MSL Motor Group Men’s Try of the Year Award.

The Zurich Contribution to Irish Society award was presented to Tommy Bowe in recognition of his unrelenting efforts to support charities and initiatives across Ireland. In the past year Bowe has fronted the Irish Heart Foundation’s #Reboot campaign and ‘Let’s Get Back’ from Sport Ireland while he has also backed Rory Best’s #Miles2Mayo walk and continued to advocate for Tackle Your Feelings. Bowe also uses his platform on television to further many other causes.

Each of the winners have received a Whoop 4.0.

Simon Keogh, CEO of Rugby Players Ireland commented: “While we would have loved to have celebrated the 2019/20 campaign at the season’s end, nothing has been as it was over the past 18 months. Nevertheless, we feel it is important to acknowledge the efforts of our members who continued to perform to the best of their abilities both on and off the field during the most unusual time in their careers. I wish to congratulate all of our winners and applaud our members for their efforts.”

Anthony Brennan, CEO of Zurich Ireland said: “Zurich is proud to once again acknowledge and celebrate the achievements of Rugby Players in Ireland, who have given us so many reasons to celebrate in these challenging times, while also making a real contribution to society and the health, mood and wellbeing of people across the country.  We congratulate all the recipients on winning a Zurich Irish Rugby Award which is one of the highest honours a player can receive in the game here in Ireland. We are also delighted to support Rugby Players Ireland who continue to ensure that all players avail of the help they need to enable their on-field performances.”