Renters are estimated to make up 20% of the Irish housing market. According to Zurich's Niall Concannon, no matter where you are on the property ladder, protection is paramount. 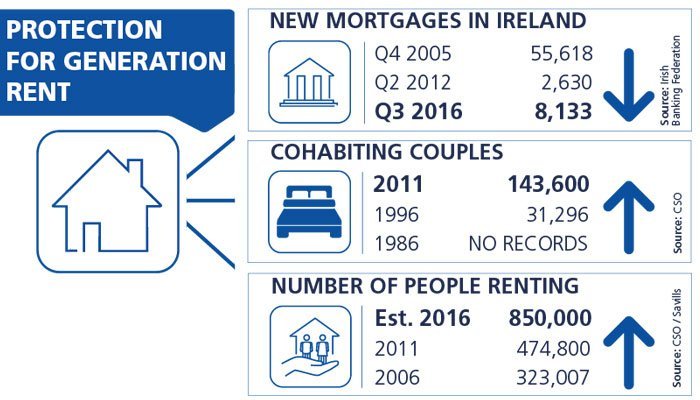 Prior to the financial crisis of 2007/08, the general consensus was that the rental market was primarily the preserve of students and young workers in their 20's. However, one significant consequence of this crisis is that renting is now seen as a longer-term option as many couples are now settling down and raising families in their rented homes.

Although the infographic above shows that the mortgage market has recovered somewhat from its recessionary lows, it is nowhere near back to its boom time heyday.

The real social concern here however is the lack of personal protection that most renters should have in place. There doesn't appear to be any general awareness or discourse in the market of the consequences of these low levels of personal protection, this in spite of the fact that renters are now estimated to make up approximately 20% of the Irish housing market.

Currently, many renters cannot even save for a mortgage as most of them rely on two incomes to simply pay the rent, particularly in Dublin where rents are astronomical. Therefore, for one half of a couple to lose their income through illness, disability or death could mean facing massive disruption if they had to move elsewhere or face the possibility of homelessness in the worst case scenario.

As cohabiting couples in general tend to be younger and as such are skewed towards also being members of 'Generation Rent', the financial implications of this situation are therefore amplified.

People living in non-marital relationships are not entitled to claim the Widow(er)'s/surviving civil partner contributory pension which is a benefit payable to the surviving spouse/civil partner regardless of means. Therefore, if you have a mortgage and are married, you will at a minimum have your mortgage paid off through your mortgage protection policy and also receive the Widow(er)'s pension in addition to whatever income you receive yourself. However, if you are cohabiting and renting then you are entitled to... well basically nothing.

Given that the cost of life insurance has never been cheaper and is particularly inexpensive for younger couples, it really makes sense for people to consider taking out personal protection cover. Generation Rent is in a precarious position financially and if they don't adequately protect themselves they could end up becoming Generation Lost.

Personal protection may cost less than you think. Use our handy Life Cover Calculator to estimate how much your premium will be.

Niall Concannon is Business Development Director at Zurich and is primarily responsible for generating protection business. When it comes to protection for you and your family there are a number of options to choose from, depending on your circumstances. Find out which protection cover suits you.