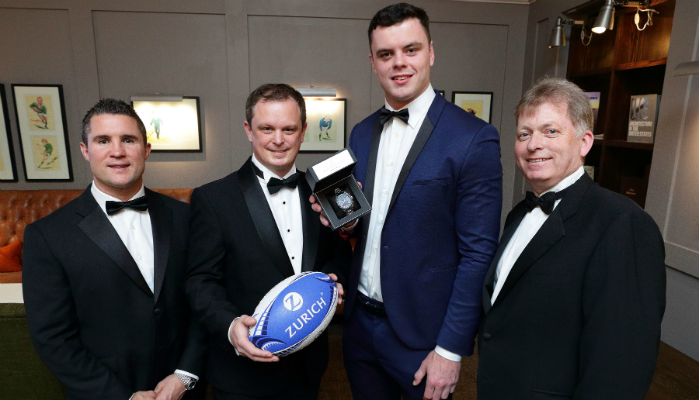 Leinster and Ireland’s James Ryan was named the Zurich Players’ Player of the Year 2019 by his fellow players at the Zurich Irish Rugby Players Awards ceremony. Ryan has been a formidable presence for both club and country throughout the season and beats off competition from Tadhg Beirne, Jack Carty and Peter O’Mahony to claim the award.

Still just 22, Ryan has amassed 17 caps for his country since making his debut against the USA in 2017 and has become an increasingly influential figure in the Irish camp. This was further acknowledged by his peers who also deemed him to be the Nevin Spence Young Player of the Year 2019 ahead of Jordan Larmour and last year’s winner Jacob Stockdale.

On receiving his award Ryan commented: “It’s always nice to win awards, but tonight has been particularly special in that I am being recognised by my teammates and opponents. I have many great memories of the season but there have also been plenty of learnings that I will take with me into the future. A special word of thanks to my family who continue to guide me through what has been a fairly hectic rugby career to date!”

Anthony Brennan, CEO of Zurich in Ireland said: “I wish to extend my congratulations to all of our worthy winners tonight – and to all of those who were nominated. Zurich is delighted to sponsor these Awards which acknowledge and celebrate the hard work that these players put in on and off-the-field throughout the season. We look forward to continuing our support of Rugby Players Ireland and the Tackle Your Feelings campaign, which enters a new phase as we continue to  encourage people to look after their mental wellbeing with the support of some of Irish sport’s most influential names.”

Simon Keogh, CEO of Rugby Players Ireland added: “Winning a Zurich Irish Rugby Players’ Award is the highest honour an individual player can receive in Ireland. To be acknowledged by your teammates and opponents in this manner goes some way to justifying the sacrifices that are required to make it at the top-level of the game. Ryan has enjoyed a fantastic season, as have all those who have won awards tonight.”

Connacht’s Jack Carty was crowned the Virgin Media Sport Supporters’ Player of the Year. Carty has had an outstanding season, winning his debut Irish cap in addition to becoming Connacht’s record points scorer.

The tireless commitment of Shane Byrne to communities and charities throughout Ireland and beyond means he is a fitting recipient of the Zurich Contribution Contribution to Society Award.

Other accolades announced on the night included: Conor O’Shea success onto the BNY Mellon Hall of Fame and Darren Cave, who will be retiring at the end of the season, being awarded the Vodafone Medal for Excellence, which rewards achievements on and off the pitch. And members of the public voted that Ireland’s victory over New Zealand in November was the Druids Glen Hotel & Golf Resort Rugby Moment of the Year.