How fatherhood focused the mind of Eoghan Wherity to the benefits of starting a pension. This article is an Irish Times Content Studio production. 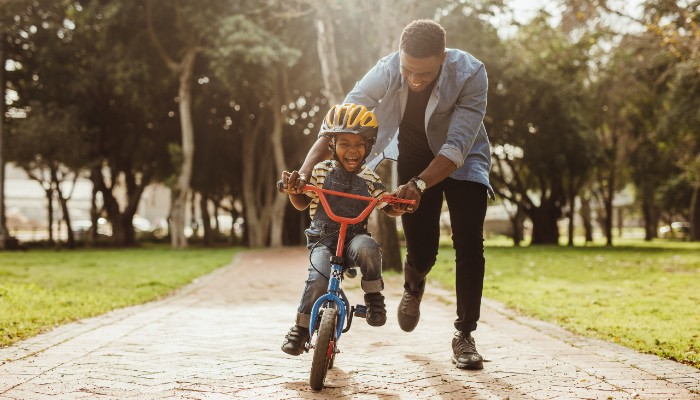 Eoghan Wherity was gifted golf lessons for his 40th birthday and since then he has been in love with the sport.

He played the game a bit while abroad, but work got in the way. The present was to try to get back into it.

He has always been eager to try new sports, and as he entered his middle years, he made a resolution to pick up new hobbies to counter the perceived sedentary aspects of his so call mid-life.

Sport and activities have always played a huge part in the 40-year-old Donegal native’s life. If he is not watching GAA or supporting Liverpool football club, he is somewhere cycling. For him, cycling is an important part of his lifestyle. He cycles everywhere and with everyone. He cycles to work, to the shops, with his children and with friends, whenever he gets the chance.

As a father to three kids under the age of five, life is busy. He manages to juggle one of his passions with the more practical side of family life incorporating one of his hobbies, cycling, with spending time with his children. He does this by transporting two of his brood – his three and four-year old to daycare on his way to work on his cargo bike. He invested in a top of the range trek bike for when he’s out cycling with his friends.

Wherity juggles getting on his bike with a very busy work life as an accountant for a property firm in Dublin. He studied the subject in college and worked at Deloitte here for a while before making the move down under to Australia as many of his classmates did.

He emigrated to Melbourne with Susan, the woman who would become his wife, stopping in South America en route. They spent six formative years there together enjoying the outdoor lifestyle that is so much part of Australian culture.

Before moving half-way around the world, he hadn’t considered a pension but his job in Australia had an auto-enrolment pension policy in place. That was the first time Wherity had given his financial future serious consideration.

“Up to then it was something I thought I’d sort out down the line,” he recalls.

The pull of family was one of the main reasons he came back. “In your early to mid-30s you start to think of things differently.”

He decided he wanted to settle in Ireland. In his first job back, he chose not to opt into the workplace pension scheme. Foremost on his mind was securing a home for him and his wife. He started saving up for a deposit.

“I decided not to start a pension because I was saving for a house. I needed to gather as much money as possible for a deposit in order to qualify for a mortgage.”

Once he secured his home in Dublin 15, he changed jobs but the company he moved to was smaller in size and didn’t have a pension scheme in place.

Having become a father, his outlook on financial security had changed and he worked out that a pension should be part of his overall renumeration package.

“It was a negotiation on my part. I told myself I would love to sort out a pension before I reached middle age as well.”

Wherity joined Grayling Properties as its head of finance and was in charge of setting up a pension scheme for the company. It was work he was excited to take on because he knew it would be a huge benefit to himself and everyone else.

He reached out to financial broker David Crowley from IFC Finance who put him in contact with Zurich and his firm joined their scheme.

Wherity has been in Zurich’s pension scheme for about three years. With his home secured and the mortgage repayments manageable, he felt it was time to upgrade his contributions. This year he started to put more aside. He used his employment experience in Australia as a benchmark. In it, 10 per cent was automatically taken from his salary. He wanted to match that level of payment.

Upgrading his pension provided him with greater tax benefits. “For everything that I contribute to the pension scheme I knew I had up to 40 per cent tax relief on it. If I wanted to save €100 into my pension, I could pay that in without paying any income tax on it.”

“I really found it is a great kickstarter if you’re in a similar situation because you’ve already had the benefit of the 40 per cent tax relief on it. As long as you don’t see yourself needing these savings for the next 15, 20 or 30 years.”

His six-year stay in Australia entitled him to citizenship and having a pension there gives him great peace of mind and even has him planning to retire early and travel around the world’s most southerly continent. “We might decide to buy a van and travel around Australia with the money that’s been sitting there for the last 30 years.”

He hopes to take his kids to Disneyland in a few years when they are a bit older. He’s able to plan trips like this, and more, because of his pension. “It gives me peace of mind into the future. I know I do have a nest egg.”

He’s also mindful of discussions to raise the eligibility age of the government pension. “If that’s the case, I know that I can support myself and retire a bit earlier.”

In the meantime, when he’s not on two wheels he can be found on the driving range or on a course. The peace of mind of having upgraded his pension and fine-tuned his financial future frees him to play about once a fortnight.

Eoghan Wherity was paid a gratuity for his time and contribution to this article.