Following a new US-Mexico trade deal, equities hit new highs. The global index was up 0.6% too by positive moves in the US and Japan. Ian Slattery reports.

Equity markets closed at new highs as the US and Mexico announced a new bilateral trade deal on Monday. However, the rally faded somewhat towards the back end of the week as uncertainty surrounding Canada’s participation in the agreement weighed on investor sentiment.

A positive revision lifted the figure for US Q2 GDP growth to 4.2%, and Chinese PMIs also saw positive numbers whilst inflation data in the eurozone softened a touch.

US Treasuries lost some value, as risk aversion waned on the back of positive trade sentiment. The US dollar also had a mixed week against its peers, whilst commodities saw broadly positive moves.

The global index was up 0.6% last week in euro terms, led by positive moves in the US and Japan, whilst the UK was the worst performing of the major markets.

Oil reversed its recent weak run, and closed at just short of $70/barrel. Gold lost some ground and closed at $1,201 per troy ounce. Copper saw negative price movements once again last week, and remains down over 20% so far in 2018. 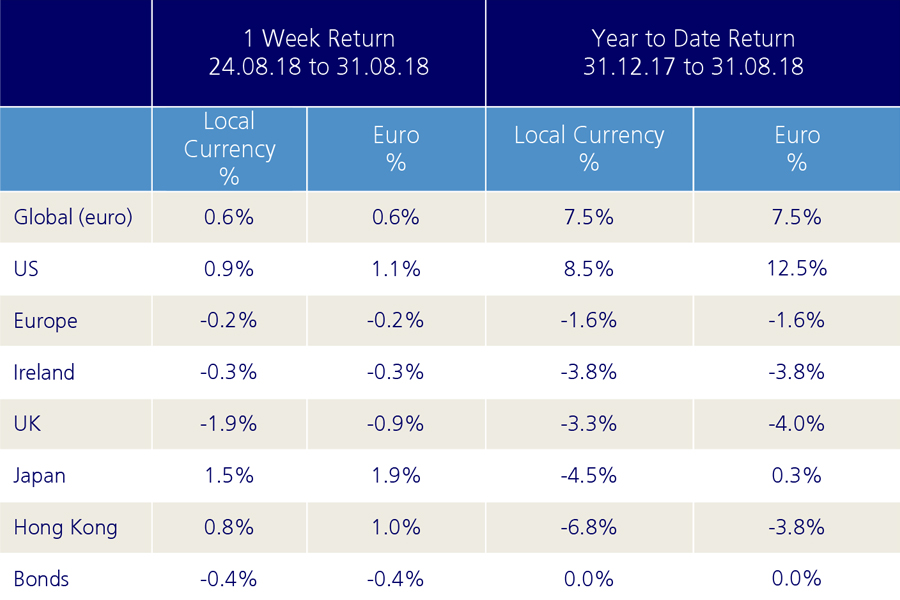 In the UK, the consensus is for the latest manufacturing PMI data to remain stable at 54.0, with the services figure expanding to 53.9 from 53.5.

The final eurozone composite PMI for August look set to be confirmed at 54.4.

The latest non-farm payrolls data goes to print in the US where the consensus forecast is a figure of 191,000, with the unemployment rate expected to tick down to 3.8%.