The Cost of Secondary School Education 2020

Children in Ireland are entitled to free education, but each year back-to-school costs are rising for families. The Zurich Cost of Education Survey 2020* highlights the increasing cost of secondary school in Ireland. Here's a list of expenses you can expect to pay each year and the lifetime cost of putting just one child through secondary education. 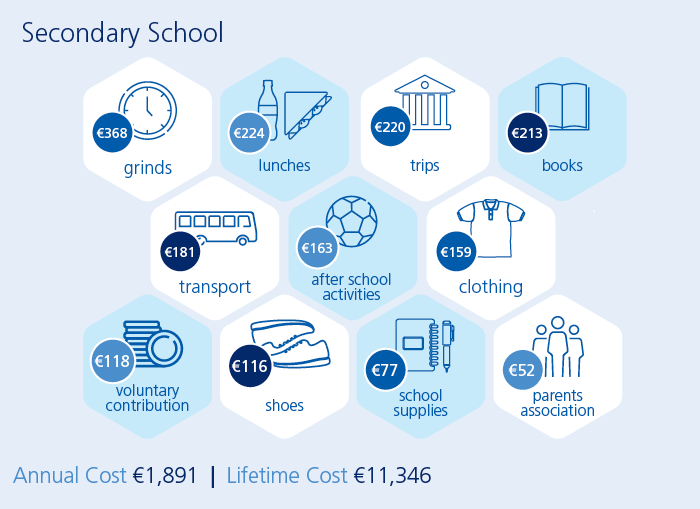 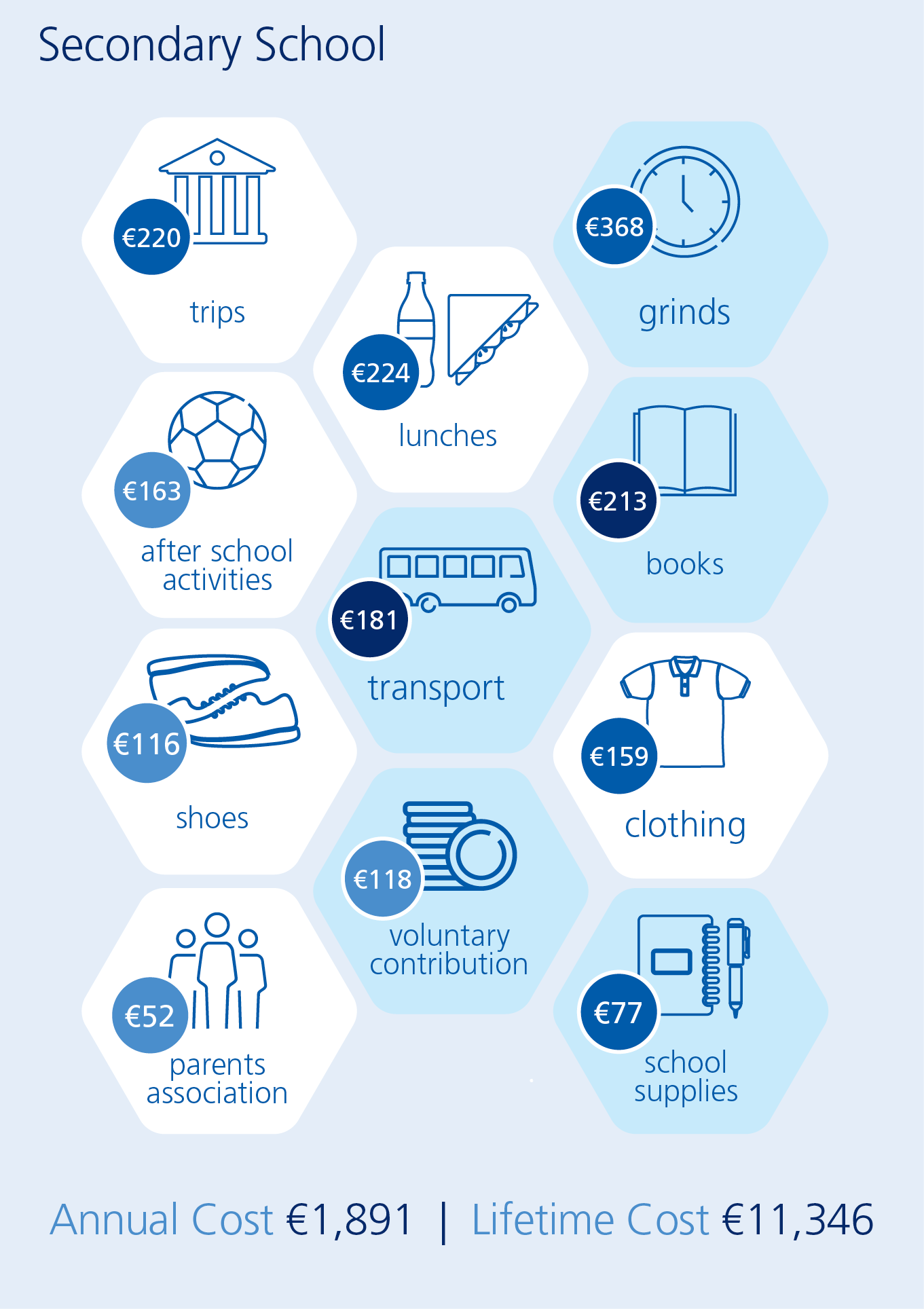 The cost of putting just one child through school can easily run into tens of thousands of euro. If you have two or more children then you're going to have to dig even deeper to sustain the cost of their educational needs over the long-term.

The Zurich Cost of Education Survey 2020* has revealed the cost of educating your children in Ireland, and details what you can expect to spend throughout your child's school and college years. The average annual cost of education for a child entering first year is €1,891; an increase of €156 compared to last year*.

According to our research, grinds are the most sizeable expense, costing on average €368 per child. The move to secondary school also brings a greater number of 'other' expenses such as lunch money (€224), trips (€220), after school activities (€163) and classroom supplies (€77).
Our research into the cost of secondary school also reveals that parents underestimate the cost of secondary school believing it to be €1,207 for one child per school year. However, our study uncovers that the cost is much higher at €1,891. If we allow for the fact that the bulk of school books will be bought in first and fifth year in the build-up to junior cert and leaving cert cycles respectively, the total cost of six years' secondary school education, extra expenses excluded, is estimated to be €11,346.

The Cost of Secondary School Education

Adding it all up

For parents with children in secondary school, finding the money each year for school items can put a strain on their finances. To alleviate some of these financial burdens, parents are constantly looking at ways to reduce their children's school costs. However, there are many expenses such as uniforms, books, and voluntary contributions that are unavoidable.

Parent's looking at reducing the cost of books during the post primary cycle said that the use of technology could have an impact here. In secondary school, parents said they would like to see more widespread use of laptops, iPads and eReaders in their children's classroom.

Similarly with regard to uniforms, parents can try to reduce the cost by providing non-branded uniforms for their children but this is dependent on the policy of individual schools. During our research into the cost of education in Ireland, we found that 56% of secondary school children have to wear a full branded uniform. Of those parents surveyed, it was found that only 22% of secondary school parents were eligible for the Back to School Clothing and Footwear Allowance for their children.

There are other areas where parents can reduce costs such as lunches and transport. Secondary school children can bring a packed lunch, but for those that buy their lunch or eat in the school canteen the average spend on school lunches in the year is €224. In secondary school, transport costs for the academic year average around €181 but if children can walk or bike to school then this will eliminate the transport cost.

There are some measures parents can take to reduce the cost of sending their children to primary school, such as providing packed lunches, walking to school and availing of book rental schemes. Other solutions to minimising the financial burden of children's education is early planning and financial saving.

Looking specifically at parents' saving behaviour, the Zurich Cost of Education research found that parents that have a savings account say their top saving priority is to cover their children's education costs.

Something to think about...

It's clear to see that the cost of education is high and increases over the years. So, wouldn't it make sense to plan ahead and build up your savings year-on-year?

With a Regular Savings plan you can gradually build up the funds necessary to support your children's education.

The table below illustrates just how much regular savings can grow with a Zurich LifeSave Savings Plus plan. For example, if you saved the Government child benefit of €140 per month for five years (as of August 2020) from when your child was born, by the time they started school you could have built up savings of €8,613 in time to fund this crucial stage in their education.

Our Cost of Secondary School Calculator is a tool that helps you work out how much you need to save to cover the costs of putting children through secondary school.

Use our Cost of College Education Calculator to work out the estimated costs of sending your children to college and to see how much you might need to save each month to meet these college costs.

When it comes to planning your future, saving is a great place to start. Whatever your goals are, saving with Zurich is a smart move. Whether using Google Assistant or Amazon Alexa, the Zurich Ireland voice services action offers you multiple savings calculators to help plan and save for the future.