This clued-in forty-something couple are taking financial advice now to make sure their pensions perform for a bright and sunny future. This article is an Irish Times Content Studio production. 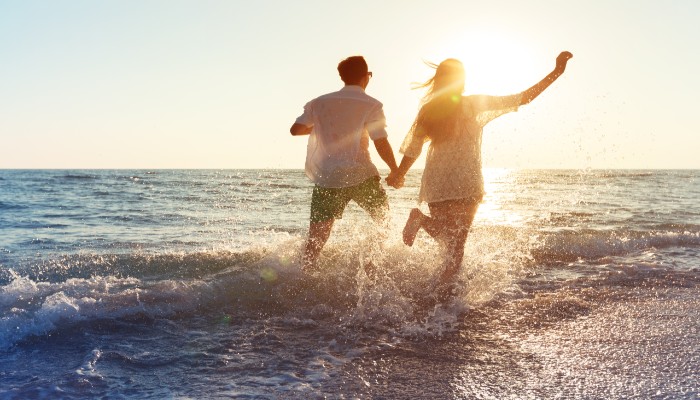 Emma and Alan Henderson both joined company pension schemes in their twenties. Now in their early forties, they’re beginning to think seriously about the kind of lifestyle they’d like in retirement. Both believe proper pension planning is the surest way to achieve it.

The two, who are Scottish, met as teenagers.

“I moved to Ireland at the age of two, and stayed for nine years, through primary school,” explains Emma.

Though her family subsequently went back to Scotland, Emma returned to Ireland for university, before taking up a career in digital marketing here.

Ayrshire-born Alan, a psychologist by training, moved to Ireland to be with Emma and has worked in banking ever since, specialising in finance solutions for business.

They live in Drumcondra and in their downtime, Emma likes to read while Alan plays golf and runs. “His other hobby is collecting small rescue dogs, we have three,” says Emma.

They’ve been working from home since the pandemic began, initially sharing the kitchen. “Let’s just say, it was tense,” jokes Alan, “made more so by the fact that Emma couldn’t get her headphones to fit into her new work laptop.”

Harmony was restored by the conversion of a spare room into an office for Alan. The pair took the opportunity to make other home improvements too. “It’s only when you’re working from home that you really see all that needs doing,” he says.

The pandemic led to changes on other fronts too.

“We’ve been talking a lot about retirement,” says Emma. “I think the pandemic caused many people to take stock of what’s important and our aim is to retire somewhere warm, which we know will take planning and saving from now on.”

Both are in occupational pension schemes. Alan joined his first such scheme at age 25. He stayed with that employer for five years, before moving to a new bank and joining its pension scheme. Both were defined benefit schemes, which provide an income on retirement related to your level of pay.

Six years ago his current employer introduced a defined contribution scheme instead, which is based on the level of payments you contribute. The company offered attractive inducements to staff to changeover, but he chose to stay in the original scheme.

“I was delighted to be in a defined benefit scheme from the start. It was as good as you’d get outside of the public sector,” he says.

Emma’s pension history is more varied. During the last recession a former employer paused the organisation’s occupational pension scheme for a period, before reactivating it. “I always felt I was a bit behind as a result,” she explains.

It was also a defined benefit scheme but, unlike Alan, Emma is now considering taking the contributions she made then and putting them into a retirement bond instead.

Her next job, with a professional services company, saw her join yet another pension scheme. Then, after a number of years, she left to join her current employer – and its occupational pension scheme.

Emma is currently working with an independent financial advisor to find out what is the best way to manage the various pensions she has contributed to over the years.

“The financial advisor has been really good. He did a full risk profile to assess my appetite for risk, and made a number of recommendations based on that,” she explains.

“It turns out I have quite a high tolerance for risk, which impacts on the funding decisions I make. I’m still considering my options. It’s complicated, and independent financial advice really helps to demystify it. I was worried because I wasn’t where I should be but he encouraged me to make AVCs (additional voluntary contributions).”

Her objective now is to maximise her chances of achieving the full €200,000 tax free lump sum that pension holders are entitled to draw down on retirement. “It was something I wasn’t clued into before. Our goal now is to get that lump sum,” she says.

It’s key to securing their home in the sun.

In the meantime, being proactive about her pension is giving her peace of mind. “It was always niggling at the back of my mind that this was something I hadn’t sorted, so it’s nice to have taken ownership of it,” she says.

“It’s also nice to know you can’t actually touch the money. I remember, during the financial crisis, reading about someone who was close to retirement but had all their money in bank shares. They lost it all and it impressed on me how quickly things can change, and how you need to safeguard your retirement planning as soon as possible.”

Alan agrees, and adds: “I often hear people saying ‘My property is my pension’ too, but with a pension you are making 50 per cent automatically because you don’t pay tax on contributions, so how can they say a property matches that?”

When the couple started out contributing to their pensions, the retirement date on the annual statements “seemed light years away, but it doesn’t seem quite so far away anymore”, says Alan.

The information contained herein is based on Zurich Life’s understanding of current Revenue practice as at 31st July 2021 and may change in the future.

Choosing a pension? Look for a provider with a strong track record