Will the G7 summit and the long awaited meeting of President Trump and Kim Jong Un in Singapore this week impact the markets, asks Ian Slattery?

Trade pressure remained to the fore of investors’ minds last week as Canada and Mexico confirmed retaliatory measures in response to the US administration’s implementation of steel and aluminium tariffs.

Talks at the G7 summit in Quebec failed to reduce the tensions, with President Trump firing off a number of inflammatory tweets over the weekend aimed at Canadian Prime Minister Justin Trudeau, provoking the ire of key allies on both sides of the Atlantic.

Bond yields (which move inversely to price) in general rose last week reflecting diminishing worries over Italy, more hawkish commentary from the ECB, and strong economic data from the US – where personal and construction spending was stronger and job openings tighter. US equities also proved to be resilient in the face of the political talk, focusing on the underlying fundamentals to finish the week higher. 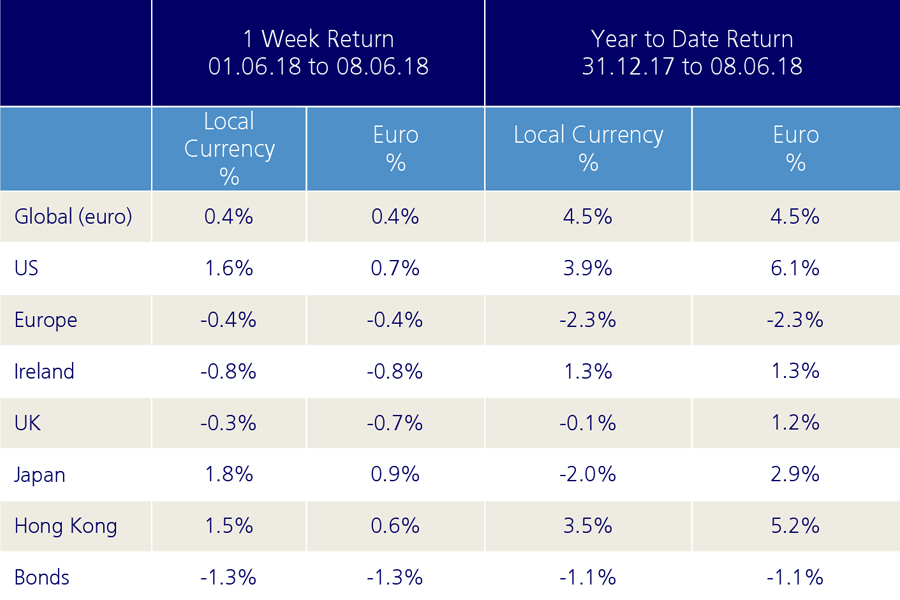 The global index rose during the week, bringing the year-to-date gain to 4.5%, Europe and Ireland lagged the market, whilst the US and Japan were strong performers. Oil was broadly flat, closing just short of $65 per barrel, and has paused for breath following a choppy few weeks of trading.

Gold was higher, up 0.4% in dollar terms, and closed the week at roughly $1,300 per troy ounce. Copper also gained value during the week, and is now flat year-to-date.

Tuesday 12 June: The long awaited US-North Korea summit takes place in Singapore, which will be closely watched for any progress towards North Korean nuclear disarmament.

Wednesday 13 June: The Federal Reserve meeting for their latest interest rate decision where the consensus expects the rate to rise to 2%.

Thursday 14-15 June: The ECB and BoJ also meet this week for rate decisions, where no changes to the headline numbers are expected.