In his weekly round-up of the markets, Ian Slattery reports that equities moved higher, helped along by a stronger dollar.

Risk assets generally moved sideways over the course of the week as trade talks between the US and China ebbed and flowed, affecting sentiment accordingly. Emerging markets have come under some short term pressure, and have been hurt by a strengthening dollar. Within sectors, momentum remains with cyclicals versus defensives, as optimism around the global economic outlook remains intact.

Treasuries sold off sharply last week, on the back of good economic data emanating from the US. Oil also moved higher over the course of the week, despite the US dollar strength, as Iran sanctions and elections in Venezuela remained to the forefront of investors’ minds.

The White House issued  a joint statement with China stating that they were both taking effective measures to reduce the US trade deficit, whilst Treasury Secretary Munchin said on Sunday that the trade war was put ‘on hold’. 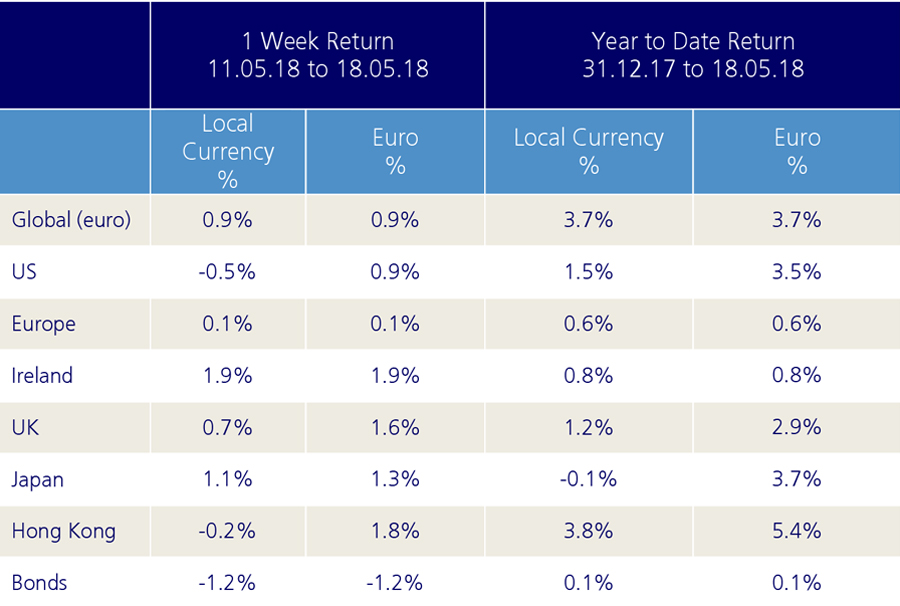 The global index was up just short of 1% in euro terms last week, helped by a strengthening US dollar. Commodities had a mixed bag of returns with gold and copper falling, whilst oil rose once again to extend its winning streak.

Wednesday 23 May: The minutes of the latest Federal Reserve interest rate meeting are released, which will be closely watched for any evolution in the FOMC’s views on US inflation.

Flash eurozone PMIs for May go to print, where the composite figure is expected to decline slightly to 55.0 from 55.1.

Friday 25 May: In the UK the consensus forecast the second estimate of Q1 18 GDP to be confirmed at 0.1% (quarter-on-quarter).

The team at Zurich Investments is a long established and highly experienced team of investment managers who manage approximately €22.4bn in investments of which pension assets amount to €10.1bn. Find out more about Zurich Life's funds and investments here.