In Richard Temperley's monthly review of the markets, he reveals why equities have treaded water following a strong rally at the end of last year and which stand-out sectors are performing strongly. 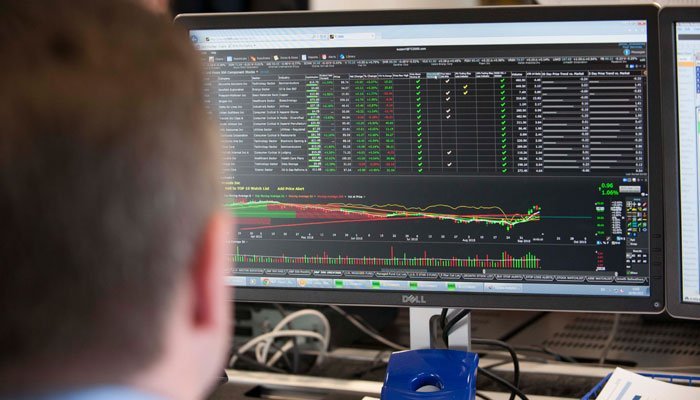 Markets are closely watching the new US administration's policy action, especially in relation to proposed corporation tax cuts. Every 1% cut in corporation tax equates to an approximate 1% rise in US corporate profits, thereby reducing the P/E ratio multiple. However, attempts to stymie policy action are causing market participants some concern. Equities remain attractively valued on a relative basis compared to bonds and cash, although they have become more expensive on an absolute (P/E ratio) basis. Eurozone government bonds offer little long-term value and have recently come under some significant pressure.

Equities were little changed in January as market participants continued to assess US policy action as well as the likely number of US rate rises during 2017. Markets were generally happy with US Q4 earnings' results which were announced throughout January. So far this earnings season, 65% of companies have beaten their consensus analyst earnings per share estimates. For top-line revenues, the beat rate is nine points less at 56%. The stand-out sector has been technology with an 81% earnings beat rate and 69% revenue beat rate.

World equities rose by 0.2% during January. They had risen by 4.4% in November and 3.0% in December 2016. There was a mixed bag of returns from the major equity markets in local currency terms in January ranging from plus 6.2% in Hong Kong, to minus 1.9% in Ireland. Hong Kong's strong move was due to more positive sentiment in China regarding economic growth as well as a weaker US dollar. The influential US market was up by 1.8%.

Generally speaking in the US, economically sensitive cyclical sectors such as materials (+4.6%), technology (+4.3%) and consumer discretionary (+4.2%) outperformed in January. Some 'bond-proxy' areas, such as telecoms (-3.5%) and real estate (-0.1%) continued to underperform. The worst performing sector was energy (-3.6%) which saw some profit-taking. 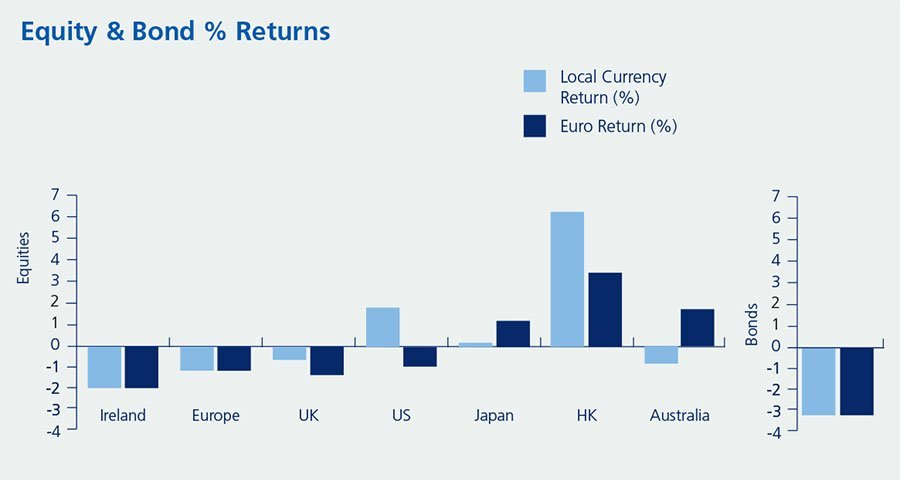 This graph shows the performance of the major equity markets over the month of January. The returns are shown in both local and euro currencies. The bond index is the Merrill Lynch over 5 Year Euro Government Bond Index. Source: Bloomberg, February 2017.

The Merrill Lynch Euro over Five Year Index fell by a hefty 3.1% in January and is now down by close to 8% in the last four months. January's decline was on the back of election concerns in Italy and France. Eurozone bonds had been supported up to the end of July of last year by economic growth concerns and increased quantitative easing. However, they are now facing an environment of higher US rates and the prospect of a reflationary US economic policy.

The German 10-year bond yield rose sharply over the month from 0.21% to 0.44%. The yield had hit an all-time low of minus 0.19% on July 8th 2016. Equivalent US rates rose marginally from 2.44% to 2.45%. Yields in the US reached a 2016 low of 1.36%, also on July 8th, and have risen due to the expectation of further interest rate rises and the likely change in US economic policy by the new administration. The markets now expect at least two further US rate rises, of 0.25% each, during 2017. Eurozone rates are likely to remain at current ultra-low levels for at least 18 months.

Commodity prices overall were down marginally during the month. After an almost 50% rally in 2016, the oil price fell by 2% in January due to niggling concerns over OPEC's plans to cut oil supplies. The gold price rose by close to 5% during the month to $1,209 per troy ounce. Gold was up 8.6% in 2016. The copper price was also sharply up (+8.9%) during January and is now up 30% since the recent rally began in mid-October 2016.

The euro currency strengthened by close to 3% against the US dollar during the month with the EUR/USD rate moving from 1.05 to 1.08. Forthcoming elections in the eurozone, however, may put some pressure on the currency.

Equities were maintained at a strongly overweight position during January, at the expense of eurozone government bonds, based on the relative valuation argument. Country and sector positions were also broadly maintained during the month. Sector wise, the funds are: Overweight technology and industrials and underweight materials and consumer discretionary stocks. 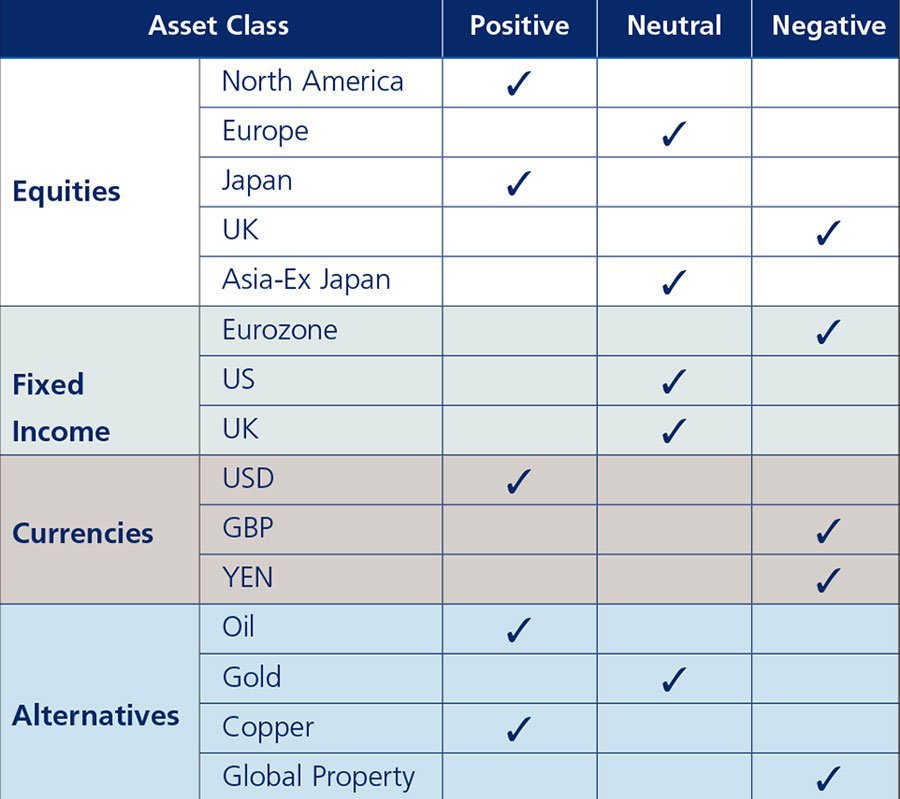 This Monthly Investment Review does not constitute an offer and should not be taken as a recommendation from Zurich Life. Advice should always be sought from an appropriately qualified professional.

Richard Temperley is Head of Investment Development at Zurich Life Ireland. The team at Zurich Investments is a long established and highly experienced team of investment managers who manage approximately €20.8bn in investments of which pension assets amount to €9.9bn. Find out more about Zurich Life's funds and investments here.